My Journey to  Endorsing Evan McMullin

I typically vote Republican, but never straight ticket. Most of the time when I get to the bottom of the ballot, I have voted all R's, but sometimes there is a D in there. I have never considered seriously 3rd party or independents or write-ins, until this year, where I will be voting for all of those.

This year I started endorsing Carly Fiorina for POTUS. I met her and heard her speak in June of 2015 as was impressed. I went and heard Marco and Ted and when Carly dropped out and we were primarily left with three, I supported Ted. At least I knew he had read the Constitution and would follow it.

August 1, 2016, I was looking at Castle/Bradley as there was no way I was going to support Trump, who I believe to be a Putin wannabee and a dictator in chief. I felt like Hillary Clinton was not trustworthy either and I felt like she was corrupt and would make the country and the world worse.

Because of some past statements Gary Johnson had made on religious liberty, I was not going to go see Johnson/Weld, on August 6th, but then Gary Johnson wrote his op-ed to the Des. News. It was good enough for me to decide and go meet him and Weld on two events that Saturday. One with about 30 people. Gary made 2 statements that were important. He agreed with the win/win protections for religious freedom and anti-discrimination that the Utah Legislature passed in 2015. Having voted for those two bills, that was important to me. Johnson and Weld also said they would nominate SCOTUS justices that understand and would support the original intent of the Constitution to limit government and protect our rights. Both had been state governors and had executive experience. I picked up a yard sign for Johnson/Weld, but then it stayed in my car for 2 months.

Shortly afterwards my meeting with Johnson/Weld, I heard Evan McMullin had announced his run for POTUS and then got on the ballot in Utah and 10 other states, plus as a write-in for a couple of dozen more states and counting. I spent my time researching Evan. It took me until last week to get to meet Evan, and I was impressed. His yard sign was up in my yard within days.

I could live with any of these three POTUS/VP teams, but I have endorsed Evan McMullin.

I agree with him, about 87% of the time and he could do the job and I trust him to do a great job. He understands protecting this country and limiting government and protecting our rights. I was impressed when he finally picked Mindy Finn for VP. She is only 35 years old, but is very smart, a mom with a husband and 2 kids from Texas and is very proud of her state and to be Jewish. We don't know if Evan wins if he will get Mindy as VP, as the choice may be from the top 2 from the US Senate. More information on Evan is at: https://www.evanmcmullin.com/
(Yes, that is a photo of me near the lower right hand corner with suit and the striped red tie.)

Can Evan McMullin win? Yes. Will Evan win? It depends on the voters. I challenge my friends to vote for either Castle/Bradley, Johnson/Weld, or Evan McMullin.

I would be ecstatic if no state electoral votes went to Hillary or Trump. I reject the notion that we have to chose between these two corrupt and power hungry candidates.
Don't vote for either Hillary or Trump.

For those looking for another choice besides Hillary or Trump

This link lists 25 choices for President of the US that have filed with the
Utah Lt. Gov., 10 on the ballot and 15 write-ins:
https://elections.utah.gov/election-resources/2016-candidate-filings#Federal

For those in different states or wanting to know what candidates are on multiple states, see the following links:

I have read that California for a write-in has be added and I am looking to confirm that. The campaign made this statement: "By the time Election Day rolls around, voters in somewhere between forty and forty-five states will be able to vote for Evan." 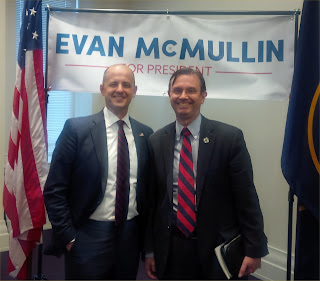 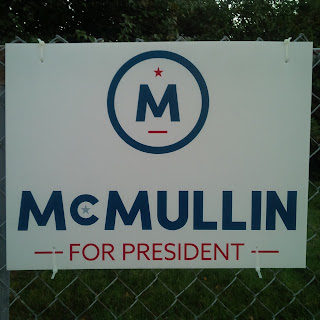 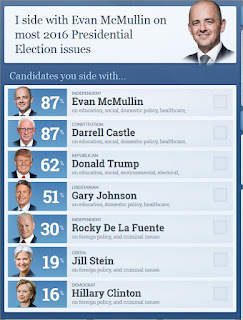