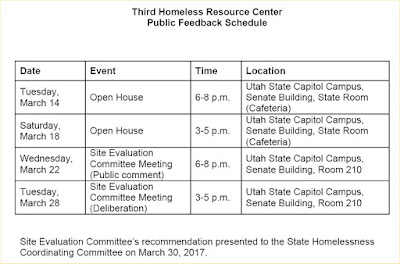 First, I stated that there was enough room at the current Draper Prison location to rebuild the prison, even if the state wanted a brand new 4,000 bed prison.

Second, I stated it would save the tax payers $100 Million or more to "Keep it in Draper".


"Rep. Fred Cox, R-West Valley City, pushed the Legislature to reject the unanimous recommendation of the Prison Relocation Commission to build in Salt Lake City. He also didn't want it moved to the other potential locations in Grantsville, Eagle Mountain and Fairfield. Instead, Cox argued it is not only feasible to rebuild the prison where it is in Draper, but it would save as much as $100 million. "I still believe the Draper site is the best location," he said."

Now that the dust has settled from the 2015 legislative votes, what has happened?


For the land area, I was told they needed 500 acres. I said there was enough land in Draper that was vacant and even if they did need 500 acres, it could be phased and would still fit as there were around 680 acres the state owned at the Draper Prison site.

The "experts" claimed they couldn't build at the Draper Prison for security reasons, even though they didn't have any issues with expanding the Gunnison Prison while it is occupied. "That is outside the security fence", I was told. I reminded them I worked on the site plan drawings for the original Gunnison Prison and I was aware of that.  I also told them they could build at Draper out side the security fence and even proposed a construction access point that would not create a security problem.

Again, I am not an expert on prisons. I served as a volunteer at the Draper Prison for 2 years. many years ago I worked on the construction drawings for the Gunnison Prison, including the site and floor plans and also the site and other drawings for Oxbow in South Salt Lake, plus site master plans for several proposed prison locations around the county, while working for a local firm. I have spent 30 years designing sites for commercial shopping centers and other commercial sites.

I was told I didn't know what I was talking about. I have been proven right on all accounts.

Later, when the "real" consultants were hired, instead of the "experts" from New Jersey and Texas, the state decided they only needed 323 acres west of the Salt Lake Airport and it would have plenty of room to expand.


Now that they are adding up the cost of the west of the Salt Lake City Airport location, they now need $100 Million more from taxpayers.

Wow! Who could have seen this coming?

Do Not raise the tax on food

The number of people that are just getting by, without help, where food is the last thing on their budget, is too many. If raising the food tax increases the number of families needing outside help, including from taxpayers, it is the wrong thing to do. I fought this in 2011 (and since) and I hope it fails to pass this year. Go to the store even once and realize the $3 you have isn't enough to buy that can of chicken with the sales tax and you would not be in favor of adding back the full tax on food.

There are $3/4 B in other tax credits or reductions. Yes, something needs to change, but not starting there.

Does the earned income tax credit help struggling seniors on a fixed income?

Some great articles on the subject:

Former State Rep. Holly Richardson:
"This year, it's straight-out a "revenue enhancement" or a tax increase called by another name.


"Here's the deal. It is only revenue-neutral to the state. It is not revenue neutral to people.

"Adding the tax back on food is regressive, meaning there is an inverse relationship between the tax rate and the taxable income. Clearly, the food tax negatively impacts families at the lower end of the income scale because — as is frequently noted — everyone needs to eat. An increase in the food tax balances the budget on the backs of Utah's working poor. The Legislature needs to look for others options."

Former State Rep. Jim Nielson
"Sure, that makes things stable for state government. Downright convenient, in fact. But a boon for the government can be a bane to taxpayers."

"To have stable sales tax revenues during economic downturns means the government takes more from taxpayers in bad times, regardless of our diminished ability to pay. We're asked to keep paying, even when we can't. Which begs this question: Just who do we as lawmakers represent, the government or taxpayers?"
Posted by Fred C. Cox at 12:45 AM