How to Keep the Prison in Draper Utah 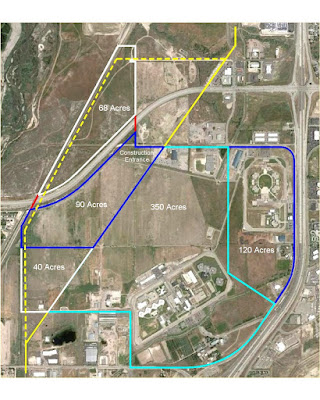 The prison can obviously be re-built new on site in just 2 phases. It will not cost more, and will likely save money. 93 percent of the voters in my area said even in January to keep the prison in Draper. They knew it would cost money. How much we keep of what is good will save more, but I believe even if we rebuilt the entire complex at Draper, the cost building new at the other sites will be more, counting wetlands, water, sewer, transportation, etc.

Back to the sketch.

The yellow line is approx. where the power lines are. The dashed line could be a proposed power line re-location. To move the lines would likely cost millions of dollars. How many millions would determine if it is worth it or not. The difference between $2 M or $20 M is a big deal.  I don't have those numbers yet. I just have confirmed it is possible. The power company has relocated lines dealing with Mountain View highway. They can do it. It isn't free.

The buildings can be built so they are not too close to or under these lines.

I have designed several buildings near and under power lines before, for example the ECI building west of I-15 at 700 S and 700 West in Woods Cross. It has transmission lines from 2 different power lines on both sides of the building. Depending on the amount of power in the lines, the distances between the lines and the buildings are different.

The other lines on the sketch shows different areas.

The NE corner near I-15 is approx. 120 acres. If we decide to replace all of the buildings as opposed just the worst ones, that 120 acres seems to be the most valuable for commercial office or retail to be eventually sold off to the private sector and developed and used to help replace part of Draper's property tax loss.  It has visibility and access off of an existing intersection at Bangerter. It can be accessed from 2 different I-15 interchanges.

The part north of Bangerter is approx. 68 acres. It could be used for a hub for transit, wetland credit,  or manufacturing, commercial or residential. It is likely not going to be used for expansion and could be sold off at any time.

Out of the approx. 680 acres there, that would leave almost 500 acres. Enough for the new prison.

The main men's prison area where Wasatch is about 50 to 60 acres.  That total section of ground in the middle of the site is about 350 acres and likely could include all the current prison rebuilt.

There is about 90 acres just south of Bangerter. It could be kept for Utah now to speed up phasing, or kept for future expansion or sold later for office or manufacturing.

The remaining 40 acres on the west, south of that would likely be kept for expansion, or used to help phasing now.

There is actually a few more acres there, but it is clear the existing main men's prison area can be rebuilt north of it, and then torn down and then the rest of the complexes replaced on site and then the existing town down, with approx. 180 acres sold and 500 acres kept now, with an option of selling 90 acres later.

However, selling land now will make it harder to re-build the prison on site 50 years from now. We need to be careful not to sell too much land.